On September 25, 2021, at 2 pm Pacific, Eleonor Bindman presents a workshop focused on her Bach Cello Suites for Solo Piano Arrangements for the Amateur Music Network! This will be a great workshop for amateur pianists and Bach enthusiasts.

UPDATE – See An Excerpt from the Workshop Below: Conversations Around the Piano: Frances Wilson

Episode 2 of “Conversations Around The Piano” focuses on the experience of adult amateur pianists and features the award-winning British writer and blogger Frances Wilson, A.K.A. “The Cross-Eyed Pianist”! Conversations Around the Piano

Episode 1 of Eleonor Bindman’s new series “Conversations Around The Piano” features cellist Dale Henderson, founder of Bach in the Subways. Eleonor and Dale talk about his global initiative, discuss J.S. Bach’s Cello Suites and compare the piano and cello sounds in a “duet” of the Sarabande from Cello Suite No. 5. “Watching my adult students struggle with difficult pieces revealed the need for a new kind of piano repertoire” – says the Latvian-American pianist and transcriber – the kind that helps people participate in music-making of the highest order without weeks of practice, tension or feelings of inadequacy. Her latest project, a piano transcription of J. S. Bach’s Cello Suites, accomplishes just that. And Bach lovers of all ages have expressed enthusiasm for this wonderful new set of piano music, some finally being able to play their favourite music well despite arthritis, others eager for quality warm-up and technique-building material, and many simply relishing a new Bach immersion which makes these stay-at-home times a lot more bearable.

See the piece on PianistMagazine.com! J.S. Bach Cello Suites for Solo Piano a Pianodao recording of the Month

The Pianodao blog names J.S. Bach Cello Suites for Solo Piano their Recording of the Month!

“I was intrigued to hear about New York-based pianist Eleonor Bindman’s latest project: the transcription, performance and recording of Bach’s Six Cello Suites for solo piano. … Arrangements have variously been made by Raff, Godowsky and Siloti, but as Bindman notes in her essay, these versions considerably embellish and add to Bach’s original design. Hers is a markedly different and radical approach… Despite preserving the predominantly single line of the original versions, the warmth of the piano sound and register rich in overtones (further blessed by subtly sustained resonance) reveals the harmonic architecture of the pieces with freshly polished coherence. … these transcriptions are not merely fascinating, but an equally expressive, exhilarating and rewarding listening experience. … Quite simply (and irrespective of the particular novelty factor here) this is Bach playing of the highest order. … Listening to Bindman’s recording, I was immediately struck by the mellifluous beauty and sensitivity of her renditions of these iconic cello works; that she has transcribed them so well and plays them with such assurance, grace and finesse makes this 2CD set an easy choice for my Recording of the Month.”

See the full review on PianoDao.com Prepare to be surprised when you listen to the new 2-CD release of Eleonor Bindman playing her piano arrangements of Bach’s Cello Suites. Ms. Bindman’s arrangements faithfully include the notes you will find in the original Bach, but have become works that are new, unique, and completely satisfying on their own terms.

That is just one of the discoveries to be made in this new recording, which follows an earlier, excellent 2-CD recording, The Brandenburg Duets of four-hand transcriptions of the Bach Brandenburg Concertos that Ms. Bindman performed with fellow pianist Jenny Lin.

In nearly every way, the Cello Suite transcriptions feel very different from the Brandenburgs. How did that happen, and what was the thinking behind this new release? We spoke with Ms. Bindman, and here is what she had to say.

Classical Archives: What motivated you to transcribe and record these pieces?

All my transcriptions are motivated by the desire to play my favorite music on the piano. My first major piano transcription – Mussorgsky’s Night on Bald Mountain – was made because I just loved the orchestral piece and wanted to have more Mussorgsky to perform.  Max Reger’s piano-4-hands version of the Brandenburgs has been on my music shelf for decades but proved too unwieldy when I tried to play them with my piano duet partner.  So I made a new, playable one, thinking that a good arrangement would really enrich the piano-4-hands repertoire.  The Cello Suites by nature are suitable for amateur pianists so this new set is also intended to provide more playable Bach for them.

See the interview on the ClassicalArchives.com blog! It is my pleasure to share The Cross-Eyed Pianist‘s preview of my October 9 release of J.S. Bach Cello Suites for Solo Piano in a piece titled, “Finding the ‘essence of Bach’: How a lifelong love of Bach led this pianist to transcribe the complete solo cello suites”:

“The Six Solo Cello Suites are some of the most celebrated and much-loved works in the classical repertoire, and they continue to fascinate and inspire performers and audiences alike. In this brand new transcription for solo piano, Eleonor Bindman pays tribute to this music’s enduring allure. … The transcription offers scope for some adventurous interpretation, particularly in the wonderfully playful pairs of Minuets, Bourrées and Gavottes. … Like the works included in her ‘Stepping Stones to Bach’, Eleonor has provided pianists with yet more repertoire to explore, and her elegantly, meticulous transcriptions shine a new light on this wonderful music while also remaining true to the original.”

See the full review on crosseyedpianist.com! 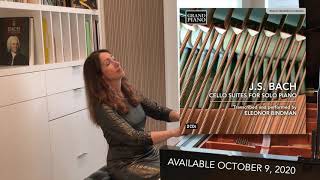 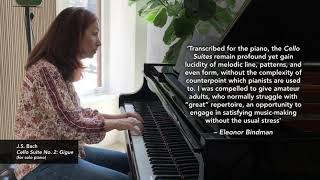 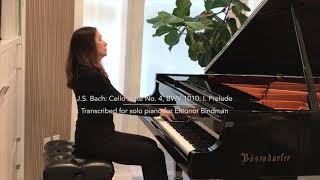 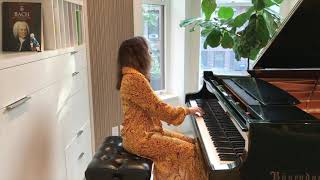 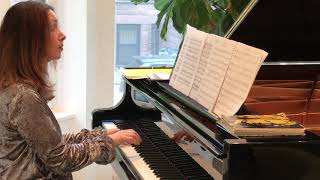 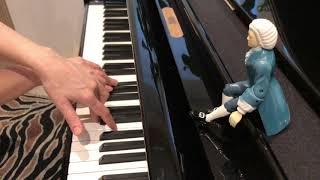 Live on the Violin Channel The Cello Suites for Piano are Complete!

My J.S. Bach Cello Suites transcriptions for Piano are complete and the recordings have officially been submitted to Naxos Records. I’m looking forward to the release in the fall, and stay tuned for liner notes. For now, here’s a first look at a proof of the cover art:

Prelude from Cello Suite No. 6 with Bach watching over!